This morning, after pouring over my iPad Mini during every free moment these past several days, I finally finished The Nazi Officer’s Wife: How One Jewish Woman Survived the Holocaust by Edith Hahn Beer. 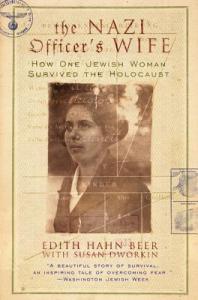 Edith, an educated woman who lives in Vienna at the start of World War II, opts to go underground and live as an Aryan Christian rather than face her fate as an Austrian Jew.  Despite the personal heartbreak of being separated from her mother, who is still in Vienna until she is deported to the ghettos of Poland, and her sisters, who escape, Edith becomes a “U-boat” as she calls herself, sinking beneath the surface and reemerging as a young woman named Grete.  Along the way, we meet the Germans who helped her, Jewish friends who labored beside her as prisoners at the asparagus farm, and even a few members of the Nazi party who, despite the risk they themselves faced, helped hide Edith’s true identity.  She then marries Werner Vetter, a German with hidden disdain for Nazi authority, all while living in fear that, at any moment, her true identity will be revealed.

The book is both amazing and heart-wrenching as Edith finally realizes her mother’s ultimate fate, comes to term with both her assumed and real identities, and tries to begin life anew in a post-war Europe filled with rubble, despair, and starvation.

Definitely the first autobiography of its kind that I’ve read.  Definitely one anyone else interested in World War II and the Holocaust should read, as well!