I’m going to confess up front that I’m riding a wave of nostalgia right now. It’s sharp, it’s somewhat piercing, and the memories are sometimes so sweet that they make me ache.

I created a Facebook group last night to spur conversation for my graduating high school class’ upcoming 20th year reunion next summer, so my mind is, for the most part, awhirl with memories of life in and around the small town of Hanover, Indiana. This morning on the hour-long ferry commute into Seattle, I pulled out the latest issue of MaryJanesFarm magazine, which is almost a spiritual text to me in its place of importance in my life, and discovered that this particular issue is all about chickens and eggs, with adorable ducks making a few appearances because Mary Jane is, obviously, a genius.

Chickens and ducks – namely the waddling waterfowl – send me right back into my spiral of whimsy.

When I think about the place I once lived in Indiana, I think of the rolling hills of the six and half acres we called home. Surrounded by woods on two sides and cornfields on the other two, it… idyllic, really. We were country kids, comfortable being barefoot most of the time.

Rolling down the big hill in our front yard was a supreme form of entertainment. Over and over again, my brother and I would take turns. We’d get to the bottom, dry grass from the last time Dad mowed stuck to our clothes, our hair, and even behind my glasses, and we’d laugh as we pushed ourselves up and ran right up that hill so that we could roll back down again. We didn’t have cable television since it didn’t come out that far, so our entertainment was four over-the-air channels and a massive library of VHS tapes. Our property was our canvas, and from those hills to the paths cut through the woods to the stand of trees we nicknamed “the Island” due to its shape, and the small grove of locust trees where I, at 14, would go to fantasize about life beyond the county and state borders with my heart set on New York City. Nightly entertainment included running around the yard catching fireflies and stargazing. Skies, unpolluted by city lights, unfurled above us the grandeur of the Milky Way. There were a lot of stars out there…

What we lacked in entertainment, we made up for in livestock. I use that word in the loosest sense, as they were not animals that we ever intended to eat. They were here to bring us joy and teach us, but there was no way on God’s green earth that any one of those animals was going to end up on our dinner plates. Our menagerie included rabbits of all types, ducks, geese, chickens, guineas, a turkey, and, for a while anyway, a Vietnamese pot bellied pig named Sweet Pea.

I joined 4-H (shout out to the Saluda Kountry Kids!) and entered the craft and baking competitions and showed rabbits, but where I shined was with showing ducks. We had chickens, but ducks “gave us an edge” in my mom’s eyes, so that’s where we focused. My first year or two, I showed the Pekin breed of ducks. White. Fat. Waddling. Cute. One spring day, my mom discovered Indian Runner ducks in the Murray McMurray Poultry Catalog and that was, to quote my dad, “all she wrote.” 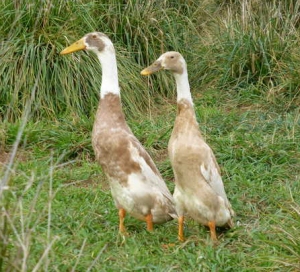 Indian Runners are the strangest looking ducks if you’ve never seen one. They’re skinny and stretched out… almost like a Coke bottle on webbed feet. They run everywhere, have a raspy quack, and are as quirky as they are odd looking. They were weird and unique and, because no one at the Jefferson County Fair had really seen anything like them, they were fantastic.

The Indian Runner flock grew quickly, and those wacky ducks became our friends. Because we got them when they were tiny and adorable, they imprinted on us. And one of them, whose name has left me with the passage of time (which makes me very sad), followed us everywhere. Wherever my mom went, you would see that duck running behind her and, behind him, our pet turkey, Basil, would be giving chase, as well. Every once in a while, one of my mom’s many chickens (probably named “Henny,” because she named all her hens variations of that) would join in, too. It was quite the little line of poultry trekking across the yard as my mom went about her business.

I’ll never forget when Mom collected our first batch of duck eggs. She and I ate them for breakfast, and I still remember their rich color and taste. No egg from the store ever tasted as good as those duck eggs did. Dad, however, blanched and made faces, declaring that he would never eat a duck egg. He stayed true to his word. I still crave duck eggs. I have found a few sources that sell them locally, although they are astronomically price. I’m willing to pay $10 for a half-dozen just to see if they are as good as I remember.

Not surprisingly, my Indian Runners took Grand Champion multiple years in a row at the county fair and, even more exciting, my dozen eggs always won Grand Champion in the egg competition. I still don’t know why, but winning the egg competition was my favorite part of 4-H, even when my cross-stitch pictures were over in the Arts and Crafts barn also kicking butt and winning the top awards. In retrospect, I think I loved it because duck eggs in a competition field of chicken eggs made me feel unique. My 12-year-old heart was probably a little smug, now that I think back on it, because my ducks took their chickens to the proverbial cleaners!

By the time I was 17, I had a part-time job, a car, and my dreams of getting out of Hanover were larger than ever. Showing animals or participating in 4-H was so not happening for me anymore. I moved on, the ducks eventually all died off and were not replaced, and any type of livestock – except for my mom’s hens – went away.

Today, I live far away from southern Indiana and I don’t have multiple acres. I do live in a town that allows chickens as long as they are licensed, and I own a quarter acre. I’m going to research if ducks are allowed. It might take a year or two to convince my husband that ducks are the new dogs (you think he’ll buy it?), but I dream of building a small coop and introducing ducks back into my life. They come with expenses and challenges and heartbreak, sure, but they also provide food and, most importantly, a small sliver of joy. With a world that’s gone crazy and a chronic illness that wants to take me under if I let it sometimes, a passel of baby ducks might just be a welcomed respite. And think of those delicious omelets!