My blog has fallen by the wayside. Moving does that. I thought about updating multiple times, but when the situation was fluid, I was brimming with anxiety and unease and the last thing I wanted to do was put that all down for posterity.  Now, though, I’m on the other side of it and now it’s time to chronicle the journey.

I started my new role in Seattle on July 27th, but the house we were moving into wasn’t available for possession until August 15th.  As a result, I lived in corporate housing for a little over two weeks.  Having my own tiny apartment in downtown Seattle was kind of awesome.  I loved the chance to have the experience, and Skyping/FaceTiming with my husband and mom made the situation much more bearable.  I flew back to Indianapolis, arriving in the wee hours of August 13th.  The movers had come the week before so our townhouse was pretty empty, but we still had a lot to deal with (see the first bullet point below!) and then we hit the road that night at 7:30pm. Tim, Roxie, me, and a ton of junk crammed into and atop of a Chevy HHR.  I threatened to play “Holiday Road” from National Lampoon’s Vacation for the duration of the drive, but the idea was quickly vetoed. (Still not happy about that. I hummed it for the first twenty miles instead.) From the moment we pulled away from the home we’d known, it was nothing short of an adventure.  Read on…

“We’ve got plenty of room!” – LIE, LIE, LIE!!!! No, it just looks like we have plenty of room when our stuff is spread out on the dining room floor.  Once it’s packed into the cargo area until there’s hardly any space to see out the back window, stuffed into the cargo back on top of the car, and jammed into every available inch of the passenger seat, we realized that no, there wasn’t plenty of room.  In fact, we said goodbye to our townhouse for the last time and drove straight to the dumpter, where we chucked some lamp shades and a few other things we could replace on the other end.  And for the next 2300 miles, every single time we opened the passenger door to get a drink out of the cooler, something would get dislodged and go crashing out.

Never trust the straps that come with the car-top cargo carrier.   We only made it to Crawfordsville, Indiana before we realized that the cargo carrier full of stuff was slipping away.  The straps were dangling inside, loose and scary.  We stopped at a Walmart and ended up buying 40 feet of rope, which we used to lash the carrier to the car.  We wrapped and wrapped and wrapped that sucker.  By the time we left that parking lot, we were fairly confident that the carrier full of stuff (air mattress, pillows, blankets, dog crate, dog gates, and a ton of miscellaneous crap) wasn’t going anywhere, and it didn’t! 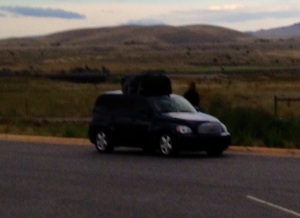 Indiana, Illinois, and Iowa look exactly the same.   Just endless miles of farms, cornfields, interstates, and windmills.  It’s very hard to stay awake when the miles in front of you look exactly like the miles behind.

South Dakota is just depressing. This isn’t a completely fair statement because, in any other trip, I’m sure that I would find SD’s rolling hills and badlands downright beautiful. But on this trip, South Dakota was my point of despair. I still had more than a thousand miles and more than a day to go, and I was plagued with worry the entire time.  Would we get a flat tire? What if we have an accident? I stared at every single mile marker with anxiety, just waiting until the moment when I could drive into Wyoming and put South Dakota in my rear-view mirror. Praying became the only way to while away the hours.  Well, praying and watching our progress on my Google Maps app!

The Best Western in Sundance, Wyoming will forever own a tiny piece of my heart. And my sanity. We arrived in Sundance after 11pm on Thursday night with every intention of sleeping in a rest park.  After all, we slept the night before in our car in Illinois and we were fine.  We all slept hard, even the dog.  But just moments after we got parked and the windows blocked out, we realized that it wasn’t going to work.  Everything hurt.  We were all in awful moods, even the dog. There was no getting comfortable when we couldn’t stretch out, cars kept pulling up behind us and irritating Roxie, and our mingled breathing heated the inside up so fast that we felt like we were in an oven. I called the Best Western up the road and spoke to the lovely night auditor, Chris, and explained our situation.  They were pet friendly and she had a room for us near a back door, which she held for us.  We checked in, took Roxie through the back door (since she was stressed out and on edge and we didn’t want to take her through a busy lobby), and we all fell into a deep, deep sleep in a freezing cold room.  We were only there for seven hours, but it was the kind of refreshing reset that fueled our ability to keep going. Plus we got to shower off some of the stink that had accumulated.

When driving the back roads of Wyoming, on the way to Devil’s Tower, you expect to be caught in a cattle drive or maybe witness a stagecoach robbery in progress. As fans of Close Encounters of the Third Kind, both of us were eager to see Devil’s Tower in person. It was our single “touristy” stop on the whole trip.  It required us to go about 80 miles out of the way, but it was so fun to wind through the hills of Wyoming and take in the gorgeous landscape.  And then to see that cool rock formation sticking up out of the hills – totally worth the detour.  After that, we headed back toward I-90 and discussed how very “old West” it felt.  There were craggy stands of trees and hills full of nothing but dead, weather-worn trees, their leaves long gone, the branches almost stripped away. It felt rustic. It felt like things hadn’t changed in 160 years.

I can’t say enough about this gorgeous state. Tim and I were in awe for hundreds of miles. Around every bend was a new range of mountains jutting towards the endless sky.  You could see a thunderstorm roll in from miles away, striking across the mountain tops, the rain beating down. 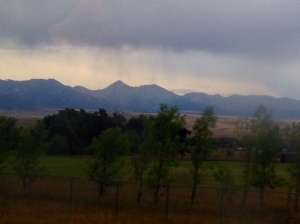 It was wild and beautiful and, like in Wyoming, I felt connected to those who lived there hundreds of years ago.

Making your dog ride 2300 miles results in her not “talking” to you the last leg of the journey. Roxie was restless most of the time so we kept her sedated. We stopped at rest parks and walked her plenty, but she wasn’t happy and I could tell.  I felt so bad for her.

The last leg of the journey, from the middle of Montana on, she’d had enough.  Instead of laying her head on the lap of whoever happened to be in the back seat, she turned her back on us and stared out the window.  That was it; she’d had enough.  I felt snubbed by her, but at the same time, I understood her distress.  She’d been in the car for two and a half days already and she was just as miserable as we were but was unable to vocalize it.

Traversing mountains at night is terrifying. We hit the Western edge of Montana after dark and then spent hours guiding the car around switchbacks and up inclines that our weighed-down car could barely handle. The engine strained as we stressed.  It was so insanely dark, and any moonlight was blocked out by tall stands of trees.  I left my bright lights on most of the time, regardless of traffic, because it was the only thing that made me feel somewhat safe.  The whole experience was, in a word, unnerving.

There is nothing more depressing than discovering that the pet-friendly hotel you’re planning on staying at in Spokane is out of business. We made it through 73 miles of mountains in Idaho and planned to stay in Spokane, but once we discovered the hotel we were going to use was no longer open, we made the mistake of pushing through…

“Pushing through” even though you’ve been driving for 14 hours straight is never, ever the right idea. This involved a four hour drive across Washington and traversing the Cascade Mountain range in order to make it to the other side, which is the Seattle metro area. I cried the last 80 miles, up and down Snoqualmie Pass.  I was the most mentally and physically exhausted that I can ever recall being, and to top it all off, I was in considerable pain.  I jammed the ring finger of my right hand and then overused it, which resulted it in being swollen and throbbing.  By the time we made it to Washington, my entire hand was puffed up and pulsating with pain.

The two most beautiful words in the English language are “we’re here.” We arrived at our new home at 5:30am on Saturday, August 16th, smelling like elephants and in desperate need of serious sleep. Still, I was filled with joy and gratitude and prayers of thanksgiving.  I honestly prayed most of the way out here for safety and security, and I was moved to tears as we finally stood in front of our new home. I gave Tim a tour of our house, which he had never seen and which I had picked out a month before, and we all crashed. I slept for three hours, then got up and took myself to the doctor to get my finger looked at.  And then we slept some more.  In fact, more than two weeks later, we’re still catching up on sleep!

So that’s the first part of our move story – the drive.  Many more parts to come as we settle into life out here in Seattle!