I love tattoos.  I got my first tattoo when I was 20.  My sister took me to a tattoo place in the Highlands neighborhood of Louisville and my tat was done by this biker dude with a long beard who couldn’t stop laughing at me because I hyperventilated and nearly passed out from the pain.  When it was done, approximately 4 minutes later, I had a tiny (1 inch tall) tattoo of a yellow daisy on my outside left ankle.  My 20-year-old self loved that tat.  I felt like a badass.  My sister, of course, spent the next decade commenting about my “mole” that looked like a flower because it was so small.

The thing about tattoos is that they hurt.  Like, a lot.  So, despite the fact that I loved them, I didn’t get another one for over a decade.  Meanwhile I got married and my husband was tatted up already, and got a few more after we got together.  Finally, I decided I was going to give in and get another one because I wanted a wrist tattoo.  Due to my love of Harry Potter and admiration for Jo Rowling, I went with a Harry-Potter themed tattoo.

That one didn’t hurt much, so I found myself ready to get another one a year later, which is how I ended up with the one on my food, which is inspired by the Broadway musical RENT.  (This tattoo HURT like WHOA.)

So now I was happy, but the new ink on my foot made the 15-year-old daisy just above it look awful.  It was faded to the point where you could barely discern what the heck it was.  Yesterday, I decided to give in and get it covered up.

Here’s Scott the tattoo artist (who also did my RENT tattoo) working on my leg:

And here’s the new tattoo!  I love it! No more wilted looking daisy!  The cover-up process is fascinating.  I can’t believe that ugly daisy was ever there before.  The hummingbird is substantially bigger than the daisy and my leg hurts like crazy today, but I’m very happy! 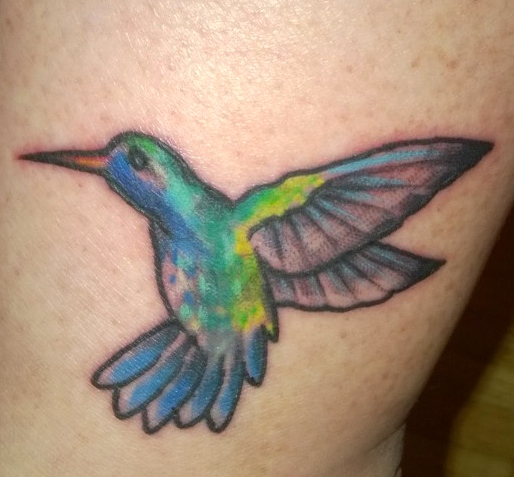 Hubby was so inspired yesterday that he finally got his fifth tattoo.  I have to say, it’s pretty freakin’ great! (He’s a Bigfoot enthusiast.)