I’ll probably fall asleep in the middle of writing this update.  (Edit: I wrote that first sentence approximately 10 hours ago, and then I went and took a nap.)  I slept nearly the entire way back from Seattle yesterday, slept all night, and still feel like a zombie.  But anyway, it’s been a busy week, and here’s the recap:

I arrived in Seattle on Sunday for four days of training.  I’ve been in Seattle three previous times this year and have enjoyed the hotels I’ve stayed in.  This time, though, I ended up at Hotel Five, which was far too industrial in its design for my liking.  Add to that noisy hallways that felt more like a dorm room at 2am than a hotel.  Needless to stay, I have no intention of ever staying at that hotel again.

Even though the hotel was cruddy, I fell in love with the apartment building across the street.  You see, of the two novels I’m working on writing, one of them takes place in Seattle.  This apartment building just spoke to me and it has become the place where my female character, Gracie, goes for refuge.  It’s a charming little building full of 500 sq. ft. studio apartments (for a whopping $995/month!)

Sunday night found me so exhausted that, after going to a true Seattle dive called The Hurricane Cafe for lunch, I was too lazy to go out for dinner.  Instead, I ordered Zeek’s pizza, where I had this fantastic pizza loaded with artichoke hearts, sun-dried tomatoes, spinach, goat cheese, mozzarella, and olive oil. 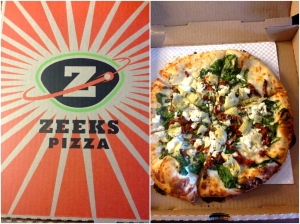 On Monday, training started out great and afterward, a group of us went to my favorite seafood place, Blueacre Seafood, after class.  As we were leaving, who did we see sitting at a table three down from ours?  The CEO of Amazon!  We all quietly gawked in awe and then had mild freak-outs once we were outside.  It was too cool!  The man is a visionary!

Tuesday, I went back to The Hurricane Cafe, mainly because I could sit quietly and read on my iPad without being bothered.  Plus, they had delicious cheese sticks.

Wednesday night found me taking the Monorail to the Space Needle, 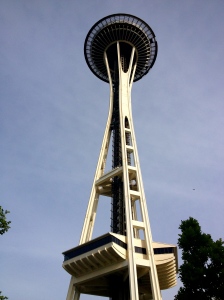 where I had dinner at the SkyCity restaurant.  I had seafood paella, which was scrumptious! 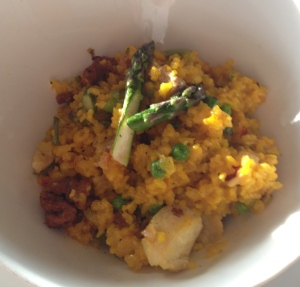 But what really mattered was the view.  The view…. *sucks in a deep breath.*  I’ve always loved that Seattle is cloudy and rainy but I was absolutely rejoicing over the fact that I saw Mount Rainier so close.  From the top of the Space Needle, it was magical. 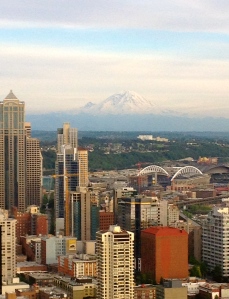 Even though it’s 90 miles south of Seattle, it fills your vision and stills the breath from your lungs.  God’s majesty is overwhelming when there are vistas like this!

Since the restaurant rotated a complete 360 degrees over the course of an hour, I got to enjoy views of downtown Seattle, watch seaplanes land on Lake Union, stare longingly at the Washington State Ferry as it headed toward Bainbridge Island on the Sound, and finally see the sun set over the water. 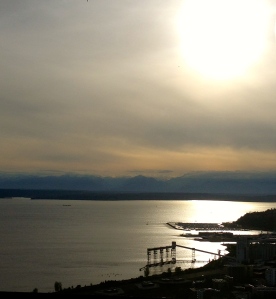 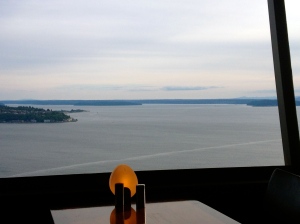 Later, once I was done eating, I wandered back down to the gift shop.  Since I’m a gal who prides herself on having a little farmgirl flair, I saw this apron and absolutely HAD to have it!  Not only does it showcase all that is wonderful about Seattle, it’s ruffled and adorable and even has my employer listed on it! 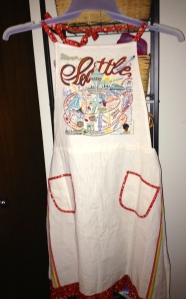 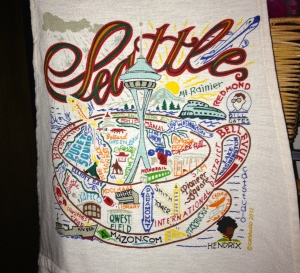 Training wrapped up Thursday, where I went back to the hotel/dorm, packed, and tried to fall asleep.  The lovely people staying on my floor apparently didn’t want me to sleep too soundly, though, and spent the majority of the night yelling at each other in Russian in the hallway and pounding on each others’ doors.  (Also, my room was haunted.  Seriously.  Things kept moving and making noises of their own the whole time I was there.)

I flew home Friday morning, but not before I had another soul-jarring view of Rainier as the shuttle headed down I-5 toward the airport.  Now I’m preparing for a grueling three weeks of work ahead. Of course, that didn’t stop me from heading to the Binford Farmer’s Market this morning!  Asparagus, pasta, a kit to make brown sugar baked beans in my Crockpot, and 4 pounds of ground lamb patties. YUUUUM!! 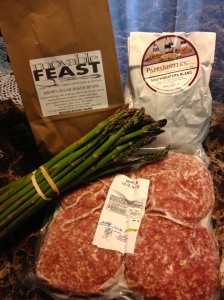 Well, I guess that’s about it for my week.  Like I said, I have an intense three weeks of work coming up and I have to find the time to focus.  Tomorrow morning we’re headed to church and the rest of my day has to be dedicated to work preparations.  Tonight, however, I’m going to be crafty for a few hours!